This is the sort of story that I want to wrap in a ribbon and present to a writer far better equipped than I to tell it. It is the story of terrible heartbreak. It is a family story. My family stories are quite often leadeningly depressing, so if it all becomes a bit much for you, I have started with advice given to James Boswell in 1763 by his friend Dempster on how to overcome depression; you might want to bring it to mind once or twice. Boswell was in Utrecht, taking in the sights of Europe and becoming a man when the “black beast” of depression settled upon him. He received letters of encouragement from his mates and over a period of a few months turned his mood around.

“So soon as you have huddled on your clothes, open your chamber window and throw your head out, keeping your mouth wide open [!] in order to feast on the fresh air. In this posture remain for near the space of a quarter of an hour. Then proceed to bodily exercise by dancing and capering [!] about your room for near twenty-five minutes”.

When things get heavy, remember Dempster’s words and push on. Caper a little. Open your mouth. Feast on the air. There is an almost happy ending. I promise.

Dance a little. Caper even.

My father was an extraordinary man. He laughed a lot. He was one of ‘the boys’. He was a long-distance runner and had a club full of friends with silly nicknames. He was Biggles. There was Lockey, Biscuit, Burger, Boysie. They drank too much beer together twice a week and in between ran unimaginable distances around the country. Once, “The Boys” organised a video birthday greeting for their Biggles from Samantha Fox. Sigh. He couldn’t imagine where I had come from, shy, reading poetry in black clothes. He loved me ferociously.

There was another side to my dad though. Every night before he went to sleep he would pray for his loved ones – dead and alive – a long chant. He would start with prayers for the living. “Look after Tracy, Granny and Grandpa, Glennie, Rae….”. Then would come the time for his list of ghosts. He once told me toward the end of his life, that this list had become so long that he sometimes fell asleep before he got to the end of it.

“Look after Geoff”. He didn’t always chant Geoff’s name. Geoff was his father who he had discovered dead in the family garage at the age of 11. 13 years after coming back from WWII, Geoff had not managed to outrun his beast and gassed himself.

“Look after Graeme”. Graeme was his son, my brother. Graeme was killed by my mother in a post-partum psychosis.

“Look after Marlene”. My mother, who committed suicide after taking my brother’s life.

“Look after Kath”. Kathleen was my dad’s mother, the dancer from previous posts. Kath jumped from a second storey balcony six months after my mother and brother died. Life is sometimes quite unbearable.

But life was not unbearable for my dad and I. We laughed. We were short on family but we married. We cried a bit. Twice he wrote me goodbye letters and once he saw my mother’s ghost in a rainbow halo of light. Sometimes we had reason to need open-mouthed fresh air feasting but mostly we were the tough guys in the room. We were the rocks; we were the islands. In the end it was cancer that was unbearable for him. 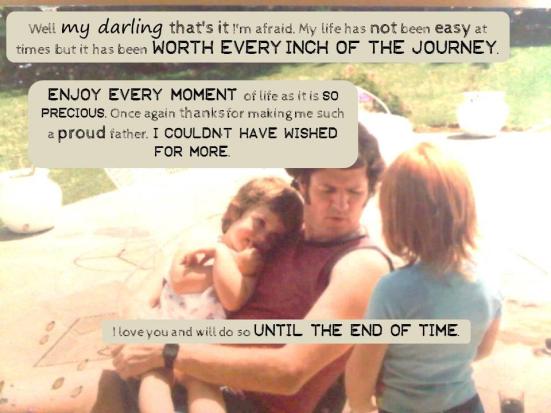 A few lines from a letter my dad wrote me when he knew he was dying. That’s him on the chair and me on his lap.

After his death, I woke up one morning and decided that I had rather less family than I needed, so I started hunting down ancestors. I have built the most extraordinary family tree made up of uniformly “ordinary” people; there’s no royal secret here. I now have hundreds and thousands of family members stretching back in time all over the world. It’s why I love history. I need a framework on which to hang this freshly laundered family of mine. So finally, I too can now fall asleep to my own ghost-chant. Geoff, Graeme, Marlene, Kath, Eric, Arthur, Thomas, Richard, William, Sarah, Edwin, Ethel, Mary…Of course they are all ghosts, but then something amazing happened.

I received this letter in my inbox. It was addressed to Mrs Violet Farrow. The letter was written in September of 1949. My dad was 2 years-old at the time. It first arrived in South Africa all the way from New Zealand, only to be ‘returned to sender, address changed, new address unknown’. When it arrived in South Africa in my inbox over 60 years later it finally reached its recipient. Kind of. It didn’t reach Mrs Farrow who has long-since passed away, it reached her great granddaughter, me!

It is with great regret I am writing to tell you of my dear Mother’s death last week. On going through her personal effects I found your address written on a piece of paper, the only address in fact, she had apparently destroyed all old correspondence, photos etc.

Since her death I have learned something of her life in S. Africa from her sister Elvira who is still living, which has greatly saddened me as I had known nothing. I am deeply grieved by my bereavement and if you are someone whom she once loved and who loved her as I think you must be, I should be so glad if you would write to me in acknowledgement of this letter.

I have no idea whether this letter will ever find you as your address may be changed but I do so hope and pray it arrives safely. And it will be such a great comfort if you will reply. I shall anxiously await news of you.

The letter was sent to me by M’s son, R. In the year and more that has passed since we were first in contact, we have pieced together The Heartbreaking Story of Staggering Weepiness. M, although she didn’t know it, sent this letter to her half sister. Their mother Ethel was born in New Zealand. In 1889, she married Charles, the son of a New Zealand-based missionary.

Charles and Ethel moved to South Africa, where Charles worked as a manager at the Singer Sewing Machine factory in Durban. They had four children together before, in about 1900, Ethel left Charles, her four young children (the youngest was 3 and the eldest 9) and South Africa with another man. One can only imagine the circumstances under which a woman would leave her young family. Was Charles cruel, I wonder? Was the new man, Frederick, that charming? The end of the story remains whatever her motivation, her children were told that she had passed away. Life went on for them in South Africa. Life went on for Ethel and Fred in New Zealand too. They had two children, M, the letter-writer, and Elvira, her sister mentioned. And life went on.

And so it is that I find myself wondering what to pack for a winter trip to New Zealand to meet R and the rest of the family. We are to put right something that went wrong over 100 years ago! It is an extraordinary story. I can’t believe it’s mine. Soon I will not need to chant the names of ghosts; I will have real living family members to populate my prayers. Although, to be fair, I’m not sure that I believe in prayer. I do believe in a little bit of magic though and I believe that, given time, even the most broken pieces of ourselves can be glued back together.

71 thoughts on “A Heartbreaking Story of Staggering Weepiness”

Warrioring through every day to live life rather than just exist - living life writ large. Healing from chronic trauma, living with depression and anxiety, one day at a time by recreating my self and what that means for the world around me. Speaking about things that society says we shouldn't discuss. | Johannesburg, South Africa “Trauma decontextualized in a person looks like personality. Trauma decontextualized in a family looks like family traits. Trauma in a people looks like culture.” — @ResmaaMenakem

Myths are more than stories